Sammy Terry, that spooktacular entertainer who captivated television viewers every weekend in the 1960’s,1970’s and 1980’s, is returning to some of his old haunting grounds in Vincennes IN this October.

The Hoosier Horror legend will rise from his crypt once again Saturday, Oct 5th, at 1:00PM to revive chills and thrills from a bygone era. Arriving at the Red Skelton Museum of American Comedy at 1:00PM. Sammy will meet and greet all who attend sharing scary stories, a classic Sammy terry stage show and hosting the wonderful 1941 classic Red Skelton film “Whistling in the Dark”.

The Red Skelton Museum of American Comedy is sponsoring Sammy Terry’s visit and the fun that comes with Sammy’s spooky stories, trivia challenges, and an opportunity for fans to meet George the Spider, get photos, autographs and meet him face to face.

Long before Freddie Krueger made living on Elm Street a nightmare and Michael Myers escaped the Insane Asylum, Sammy created screams and made his fans jump in a purer way, without the graphic effects common into today’s horror films.

“One of the things that made Sammy so unique was that when Sammy was speaking, you felt as if he could be in the very same room or just outside your window.” “You almost wet your pants and you end up laughing. That is when horror is fun.”

Revisit the chills from your earlier years by watching Sammy Terry host Classic Horror Movies every First Friday on his Facebook Fan Page or on his Official YouTube Channel. 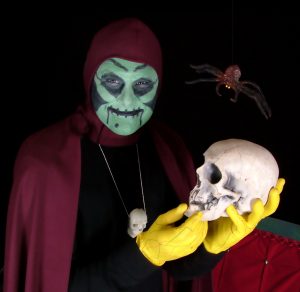