From Pencils to Pixels Exhibit will be on loan from the Indiana Historical Society from March 14- April 18, 2022

Admission to this special exhibit is included 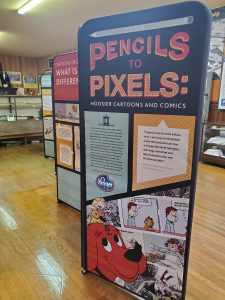 From the antics of fat-cat Garfield to the cracker-barrel philosophy of Brown County savant Abe Martin, the many creations of Hoosier cartoonists are highlighted in this colorful exhibit designed to amuse and intrigue your audience. The exhibit explores the amusing goings-on of characters from comic strips like “Chic” Jackson’s “Roger Bean,” which featured the lives of a typical Hoosier family, to the editorial musings of Pulitzer Prize-winning artist John T. McCutcheon, who was a fierce opponent of America’s entry into World War II.

Drawn from the collections of the Indiana Historical Society, Indiana State Library, and other institutions throughout the state, the exhibition also examines the life and work of such Indiana cartoonists as “the dean of America’s editorial cartoonists,” Evansville’s Karl Kae Knecht; artists from the Crawfordsville area known as the Sugar Crick School of Art; “the first black political cartoonist,” Henry Jackson Lewis, who worked for the Indianapolis Freeman; Abe Martin creator Frank McKinney “Kin” Hubbard; Richmond’s Gaar Williams, who earned a designation as the “James Whitcomb Riley of the pencil”; and Muncie’s Jim Davis, responsible for bringing Garfield to life.